Bitumen has long been used in road construction because of its waterproofing properties.  Bitumen is a highly viscous liquid and has the tendency to become brittle at low temperatures and soft at high temperatures.  Despite continuous improvements to its production, mixing and pavement technologies, bitumen when used alone in asphalt concrete mixes to pave roads cannot surmount the destructive action caused by the accelerated wear from heavy traffic and harsh climates and meet the increasing demand for safer and quieter roads.

Polymer modification of bitumen is helping to meet these challenges today.  When polymers, additives, fillers and stabilizers are incorporated into bitumen, the modification has been shown to improve binder’s properties including increased resistance to rutting, fatigue and reflective cracking and improved durability properties compared to conventional asphalt concrete (AC) mixtures.  When blended into hot mix asphalt (HMA), its workability is improved and the mix is easier to place and compact.

Millions of tons of polymer modified bitumen (PMB) have been used worldwide by the road construction industry.

Polymers used to improve bitumen properties are usually elastomers, i.e. polymers having both viscosity and elasticity properties, or simply termed as rubber. Those elastomers used in polymer (or rubber) modified bitumen could be grouped into thermosets and thermoplastic elastomers.

Thermosets flow under stress when heated, but when cooled, cannot be re-softened by heat.  Tyre-derived crumb rubber (CRM) is a common thermoset to modify bitumen.  Thermosets are generally stronger than thermoplastic modifiers and are better suited to high-temperature applications.

Thermoplastic elastomers (TPE) are a class of copolymers with both thermoplastic and elastomeric properties, combining the viscoelastic advantages of rubber and the easier processing characteristics of plastic.  Thermoplastic materials soften and become plastic-like when heated but return to their hardened state upon cooling. Some of the TPE’s used in PMB include SBS, SBR, EVA, PP and PE.

The Dry Process is any method that includes CRM as a substitute for 1% to 3 % of the aggregate in an asphalt concrete paving mixture and thus is more an aggregate modifier or filler, not as part of the bitumen binder.

The Wet Process is the method of modifying bitumen with CRM before incorporating the binder into the asphalt paving materials.  It requires thorough mixing of CRM in hot bitumen and holding the resulting blend at elevated temperatures for a designated period of time to promote an interaction between CRM and bitumen.  This is the most widely used method for modifying bitumen with CRM or other modifiers.

The Wet Process is again sub-divided into 2 methods for blending the binders, based on their viscosity ranges:-

The Terminal Blend (or No Agitation Wet Process) is a CRM Modified Bitumen (CRMB) with rotational viscosity of less than 1.5 Pa-sec.  CRM content for such blend is generally less than 10% of total binder.  This type of binder does not require constant agitation to keep the rubber particles dispersed in the hot bitumen mix.

The Field Blend (or High Viscosity Wet Process) is a CRMB with a rotational viscosity of more than 1.5 Pa-sec. At least 15% CRM by binder weight is typically required to achieve the threshold viscosity.  This type of binder requires constant agitation to keep the modifier particles well dispersed, and is usually stored in heated tanks where special paddles keep the bituminous binder agitated and properly mixed.

The Field Blend or High Viscosity CRMB is the more widely used binder for processing RAC, whether for HMA or spray applications.

The Stabilized Rubber Modified Asphalt (WDRA) has been developed to further improve the performance of RAC by combining proprietary devulcanizing processes with patented pelletizing technology.

WDRA is produced in 2 steps:-

CRM is firstly devulcanized in the patented continuous screw devulcanizer, then blended with polyolefin and other modifiers, stabilizers and additives, and finally granulated to make WDRA modifier pellets.

WDRA modifier pellets are mixed with hot bitumen in a heated tank and passed through a colloid mill where they are sheared into tiny particles and dispersed evenly into the binder, and the resulting blend transferred to a heated tank where paddles keep it continuously agitated and held at 170 – 180°C for a designated period of time to allow the modifiers and bitumen to interact.  The stabilized WDRA binder is delivered to a HMA plant, by any type of haul truck customarily used for transporting AC, where it is discharged into tanks and pumped into the pugmill to be mixed with mineral aggregates to produce hot mixture. 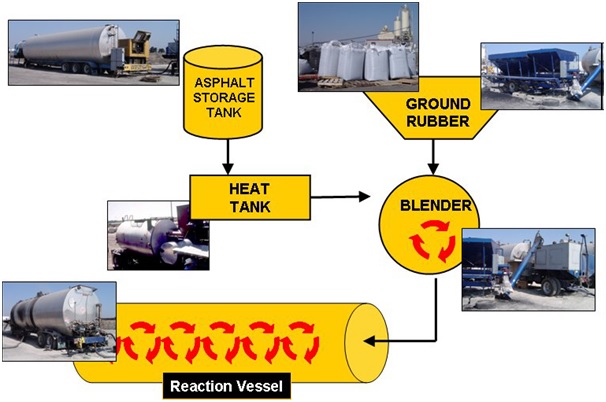 Advantages of WDRA over conventional RAC and SBS Modified Asphalt:-

Maxlink has incorporated the patented WDRA technology into developing asphalt to meet these demands:-

Maxlink WDRA pavement solutions represent a more durable and stable alternative to your road construction or maintenance requirements at a significantly reduced cost.

Maxlink WDRA bitumen modifiers are produced in pellets.  This innovative pelletizing technology provides a stable delivery system for binder modifiers and additives, making it possible to supply almost any combination of bitumen modifiers in a convenient ready‐to‐use form.

Among the benefits Maxlink WDRA pellets offer to the asphalt manufacturers include:-

Same equipment and processes used to blend SBS-modified asphalt would be suitable for producing WDRA hot mixes and spray applications.  WDRA pellets could be used for most of the common mixture designs.

WDRA pellets could be used independently or together with SBS and/or other polymers to offer similar or superior performance.

Asphalt manufacturers could customise mix designs to suit different customer needs and easily switch production from one mix design to another by changing the type of WDRA pellets and vary the concentration simply by adding more or less the amount of pellets used.

WDRA pellets are customised for each mixture design and can be produced in advance and stored at ambient temperature in bulk or bags until required for processing.

Prices of virgin polymers fluctuate in tandem with oil prices and may be subjected to shortages when oil prices spike.  WDRA prices are more stable and thus costing for each job can be more accurate and competitive.

Waste polymers are used in making the WDRA modifier pellets, making this a very eco-friendly technology.

Materials used in producing WDRA pellets conform to REACH standards, and using them would not be injurious to the health of workers or residents near paving jobs.

Governments all over the world today are focussing on environmental and health issues caused by scrap tyres and other post-consumption waste materials and are promoting the recycling of these materials for sustainable development.

Despite the proven performance benefits and obvious cost advantage of using recycled polymers for RAC, its usage has been limited.  Specialized equipment and technology were required to mix these recycled materials with the other modifiers, additives and stabilizers.  The additional cost incurred in acquiring the additional equipment often cancels out whatever short-term cost saving from using the materials.

Pelletizing the modifiers at a central production facility and delivering the stabilized pellets to be blended with bitumen at the terminal supplying the HMA plants means equipment investment is only necessary for one production facility, thus making extensive usage of WDRA possible.  A wider range of cost-saving materials could also be used to produce the modifier pellets.

A WDRA mix would use more than 1,000 scrap tyres to pave each lane-km in a 50mm resurfacing project.  These tyres would have otherwise ended up in a landfill – polluting the environment, creating fire risks and becoming a breeding ground for disease-spreading mosquitoes and vermin.  Using them for our roads is our answer to the call to reduce, reuse and recycle.

Maxlink WDRA technology provides you a viable commercial and sustainable ecological solution to a serious challenge to our eco-system.