In the Dry Process, crumb rubber modifier (CRM) is mixed together with heated aggregate and liquid bitumen in the pugmill.  In this process, CRM is considered more as filler or bitumen stabilizer.

In the Wet Process, CRM is thoroughly mixed in hot bitumen and the resulting blend is held at elevated temperature for a specific period of time for proper interaction of CRM and bitumen before incorporating the binder with the mineral aggregate. CRM is used in this process as a binder modifier.

This Wet Process Rubber Modified Asphalt or otherwise known as Asphalt Rubber (RAC) was introduced in the United States in the 1960’s and has been successfully adapted for commercial use by the Chinese paving industry since 2004.

RAC can perform better than conventional asphalt concrete, especially in extreme weather conditions and heavy-duty traffic, when the right materials and processing method were chosen.

In the comparison study, raw materials were produced as follows:-

i. WDRA was processed as follows:-

Viscosity and softening point difference obtained from the 3 modifiers after storage @ 170°C.

Sieve analysis (passing %) was performed on the aggregates and the results as follows:- 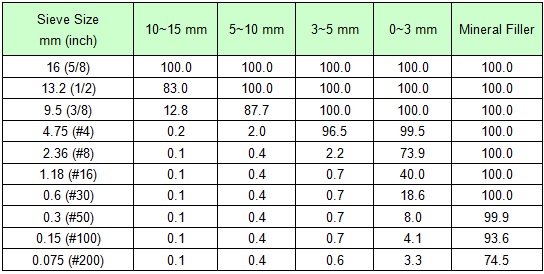 3 HMA gradations according to China’s Department of Transportation specifications were chosen for this comparison – 3 were modified with WDRA and 2 with SBS.

Same mixing process was used for incorporating the SBS modified and WDRA binders with the mineral aggregate:-

The viscosity of WDRA is much higher than that of the SBS modified asphalt, so there is no requirement for fibres in SMA13 to improve asphalt stability.

During the mixing process, it was observed that segregation, coating, color and luster of WDRA is identical with SBS modified asphalt.

From the results of the Marshall Stability Test in Sheet 6, the WDRA binder is suitable for all the 3 types of mixture design.

No fibres were used in WDRA SMA13.

The binder content for both the WDRA and SBS modified asphalt are about the same for each of the SMA13 and AC13 mixes.

Stability for both SBS modified asphalt mixes is higher than WDRA, which however does not mean the WDRA is inferior to the SBS in its resistance to high temperature (refer to Sheet 7).

Sheet 7 – Freeze-Thaw and Stability of the Mix Designs

This observation shows WDRA could be used for a wider selection of mix designs while maintaining the same or even better performance and cost characteristics as SBS.

It is evident that the lower binder content of WDRA compared to conventional Wet Process Asphalt Rubber (RAC) does not affect its moisture stability and high temperature resistance.

Performance of WDRA is comparable to the SBS modified asphalt.

This could be explained by the better dispersion of rubber in WDRA (attributed to its production process) has improved cohesion of the asphalt binder with aggregate. 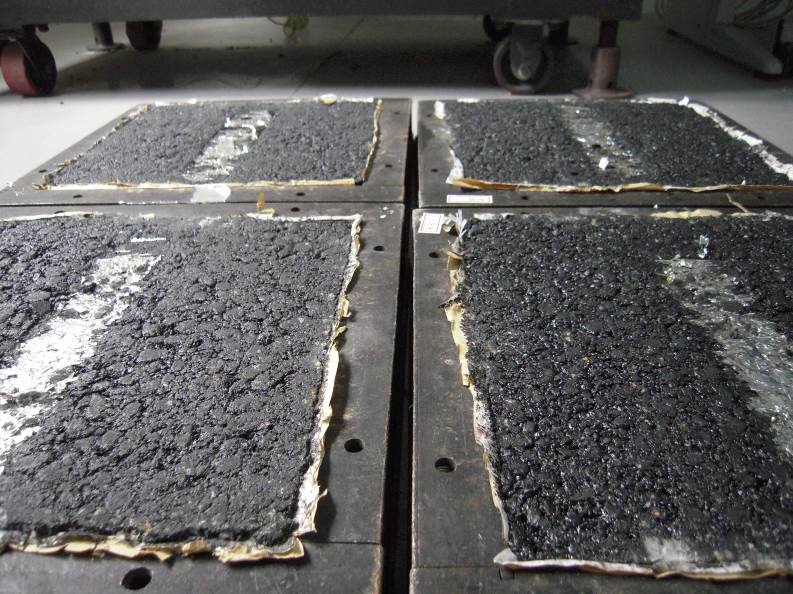 The above picture was taken of the rutting test for AC13 mixture designs.

It can be observed that permanent deformation for both samples is identical, but the color and luster of the WDRA sample is more intense. 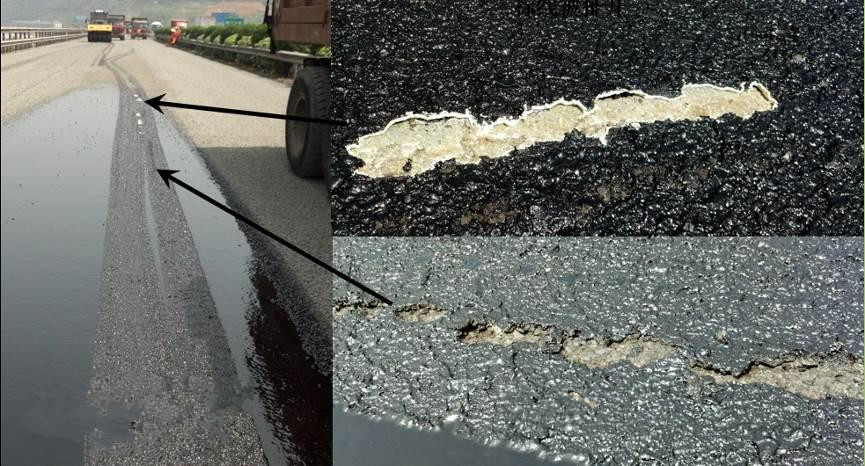 Photographs from Picture 2 were taken after a truck drove over the interlayer before the wearing course was laid.  The enlarged photographs on the right showed the WDRA interlayer exhibited very strong cohesion to the old pavement.  When a heavy truck passed directly over the newly sprayed membrane, the membrane itself was intact but pavement material and road mark was torn off.

Due to the compatibility of materials used in the mix design, WDRA demonstrated similar or superior stability and durability – registering better performance in low temperature cracking resistance, anti-stripping, flexibility, fluidity and workability than SBS modified asphalt.

WDRA when used in all the commonly used mixture types performed at least as well as the SBS modified asphalt.

The potential to expand scale and applications of WDRA appears promising.